In real life, a mild mannered locksmith and safe cracker, on the interwebs, Al Terry is better known as Fudgecrumpet, the kind of wretched, selfie­taking, thirty­something man that has an opinion about everything and occasionally uses caps lock to EMPHASISE HIS SELFRIGHTEOUSNESS. He has a blog which is steadily improving as he works out how to use the spell­checker, and from time to time, he is known to do funny pictures for The Poke, and videos on YouTube that nobody watches. He also has a beard. In his story, Al talks about the charm of a terrible toy. 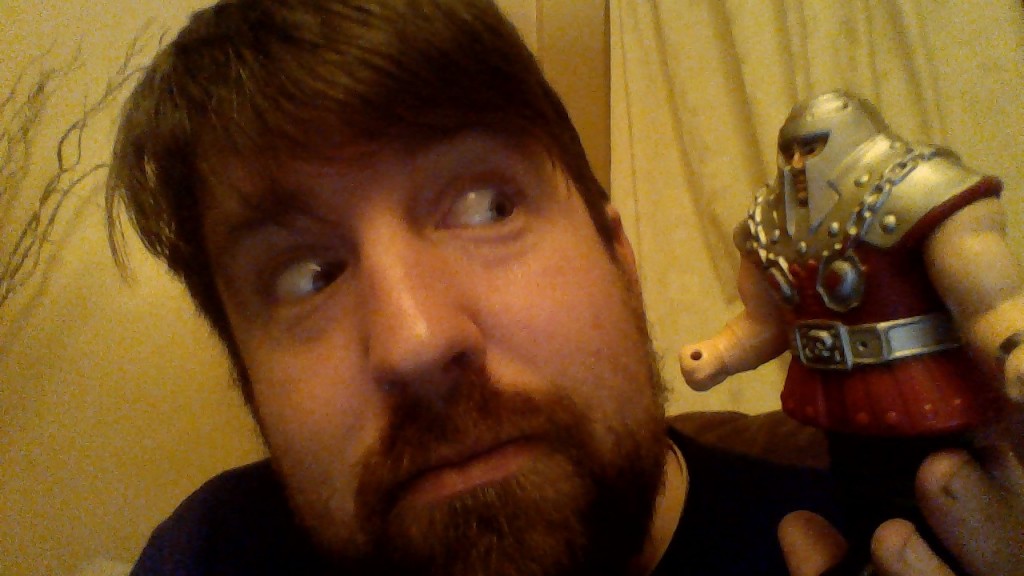 The He­Man & Masters of the Universe toyline of the 1980s was never my favourite toyline. I never liked their rubber heads, or the fact that the main guy’s disguise was pink tights with furry underpants. That, and most of the toys were basically the same figure with one gimmick attached, on the head or the hands or whatever. They all had their springy waists, and their hands gripped firmly into a wanking/sword-holding gesture. All the same, but slightly different, like a 90s boy band, but riding a tiger.

There was one toy out of the lot that was unique, and he wasn’t the best toy, he had nigh on zero articulation, and his gimmick was ludicrous to say the least. The cartoon character of the toy was pretty much the kid at school who used to eat crayons, with a general disregard for his own safety and the same voice used in the playground to mock the PE teachers. That toy was Ram Man, and despite his flaws, I consider him to be the pinnacle of awesome.

The toy is basically a torso (with head encased in armour), arms that rotate around from one point, and… well, this is the key to his appeal… he had springy legs that popped out of his body. I don’t know why this appealed to me so much, the toy is worse than most Kinder Egg prizes in regards to it’s complexity. There is something about springy jumpy legs (although really the toy didn’t jump, it tended to spring up and then fall over) that just pleases me to this day, and I take great pleasure in hiding my Ram Man toy around the house occasionally for the missus to find, resulting in one of those sighs that lets you know you’re sleeping on the sofa again tonight.

Ram Man is a terrible toy, but he has charm in his terribleness. He’s one of life’s losers and I can’t help but think that one day, I’m going to get myself some springy legs and jump headfirst into a wall myself, perhaps to defeat a cackling skeleton­faced man, or maybe just to knock a baddy into a puddle of mud.