Dr Mark Lewney, the Rock Doctor, winner of the first ever FameLab® competition and guitar physicist blows your ears with rock guitar and blows your mind by Superstring Theory. Mark delivers amazing physics, science and maths shows, talks and presentations for schools and colleges. In his story, Mark reveals the wonder of stepping from a sunny medieval street into a glowing, beeping future.

Cornwall, 1978: 5 year-old Mark Lewney sits in a Vauxhall Viva at sunny Carleon Bay watching the brand new digital display on the Leisure Centre. Letters fly across the screen, the messages punctuated by round, smiling figures jumping up and down. Mum opens the door. “Coming to play on the beach Marky? No? OK, you watch the bouncy men a bit longer.”

Space Invaders invade and retreat, Pac Man ghosts in and out, the Centipede ball rolls in, then rolls away. Games enter my house: Snoopy tennis, electronic Scramble. But their liquid crystal displays provide only the illusion of motion, like a digital watch, and occupy only a small part of my visual field.

Tenby, 1982: 9 Year-old Mark wanders through the medieval walled town and enters a toy shop. On display are what look like Viewmasters – binocular slide viewers which present a slightly different image to each eye. The sign proclaims that these are the new Tomytronic 3D games. I lift the maroon-coloured one to my eyes, and enter a new world.

I must stand beneath the light, since the game provides none of its own. My glowing blue battle tank whirrs along, and in the distance a strange orange aircraft (which incidentally made an appearance in last year’s “Tron Legacy”) approaches. I press fire, and the thing explodes. Not “lights up and then disappears”, but literally blasts apart into debris. More aircraft come, and eventually destroy me. I play again, and again. The shop and the sunny street outside are no longer there. The glowing orange and blue world is now my world. Eventually dad finds me and drags me back to the beach.

This is the world I entered that day, and £19.99 at Argos allowed me to enter once more on Christmas day.

The best strategy was to keep firing, which sounded like an electronic cicada, and dodge the bombs as best you could as the game speed increased. It was unbelievably addictive, and I don’t think I ever beat the game despite what must have been hundreds of hours of play.

Games advanced further. With my new ZX Spectrum, for the price of a few minutes of blue and yellow screeching, a new game would appear on my telly. Fun though these games were (and I can still beat Atic Atac without losing a single life), they were still on a screen over there. The next game to give me anything like the feeling I first experienced in that toy shop in Tenby was Doom: A ‘3D’, immersive game played from a First Person Perspective and, even now, the amazing new Oculus Rift games only give me a mild thrill by comparison.

I still own this thing. Here is my 9-year old son Woody playing it. 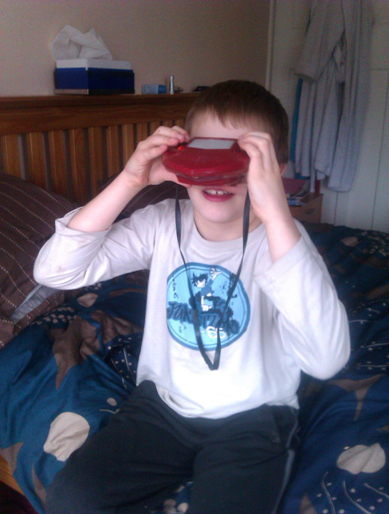 My children are bored of me telling them that I was the first generation to see computer games. I will bore my grandchildren the same way, at which point it might be as difficult to tell that you are immersed in a computer game as whether you are dreaming or awake. Indeed, it may be said that I am a First Person Perspective game with only one life. And as soon as I can play augmented-reality Doom on an Oculus Rift I will probably get arrested for doing so in Sainsbury’s.

But none of this rational philosophising or middle-aged hijinks requiring a clean-up in aisle three will ever recreate the wonder of stepping from a sunny medieval street into a glowing, beeping future and blowing 3D spaceships into smithereens.