Kate is an English actress, comedienne, singer and songwriter. In the early 80s she scored a No.2 hit on the UK Charts with the song “More Than in Love“. She went on to become a prolific voice artist, most notably with the satirical show Spitting Image. In her story, Kate reveals how she discovered that both children and plumbers can be cruel. 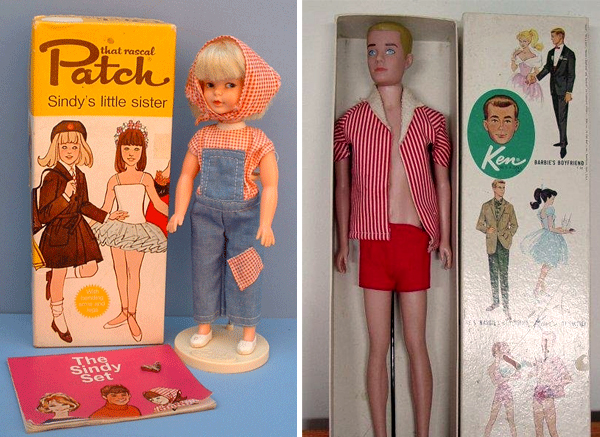 The first biggest lie that was ever uttered to me was, ‘I’ll bring you a Patch doll ( Sindy’s little sister) and a Ken ( Barbie’s handsome boyfriend ). You can keep them!’

Well, I waited with bated breath for a whole week and Christine Mc (I won’t reveal her entire name) did show up with the dolls. But they also left with her when she went. She had no intention of ‘giving’ me these dolls and yet she arrived saying, ‘Here they are! Patch and Ken, I don’t want them!’

I wept after she’d left. How could I have been so foolish as to believe her?

But we had bonded!

Me and Patch and Ken. I’d let myself love them for the two hours we played that day, fully thinking they would be my adopted dolls forever. How happy they’d be in my untidy bedroom!

How much more fun for them to live in a messy house with me and all my loud and extrovert family rather than in Christine Mc’s depressingly ordered, tidy, smelling-of-boiled-sprouts home?

She let me think she really was giving me these dolls, she even gaily kissed them uttering ‘Aww, you’re leaving me today.’

But upon leaving she just packed them into her bag and said, ‘I’ve changed my mind’

There was nothing I could do except snivel and wait for Christmas in the hope that Santa would do the good deed. But it was only June and the following six months really dragged. 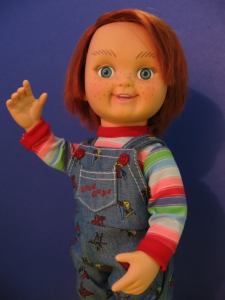 When Christmas came that year in 1967 I didn’t receive Patch or Ken but a baby doll which I can only describe as a cross between ‘Chuckie’ from the horror movie of same name and Jeanette Krankie. She was a short golden haired cherub with a porcelain face. I of course immediately cut her hair …(why do kids do this?!) and now she looked even more hideously evil.

But no matter, this was Ingrid, and she was MY REAL baby

Oh how I loved her!

She really was alive. Or so I believed. She whispered to me at night. She laughed at all my silly jokes. She cried when I cried (which was quite a lot) and she travelled EVERYWHERE with me.

And I mean EVERYWHERE.

Ingrid was stuffed into school bags, pillow cases, shopping trolleys, my baby sisters’ prams, my brother Ted’s goldfish bowl, my father’s briefcase, our family car boot, and anywhere else where the family travelled.

Where the family Robbins went, Ingrid was there.

Over the next few years she acquired a biro moustache, (not sure who did that! very annoying though) a butchered skinhead hair-do, a belly button which was drawn on to make her stomach look like a face, and a brown felt tipped arm as I’d decided I wanted her to be Jamaican for one season.

But she survived and she lived until 1997.

We had a flood in our bathroom and she got thrown away accidentally by the plumber who was clearing out all the wet mess.

Not as much as I had over the ‘Non-Patch & Ken Event’, but I still wept tears for my funny ugly little alter-ego of a doll.

And then I got on with my life.

So when you’re buying your kids an expensive but hideously ugly doll. Remember it’s not for life. It’ll probably get chucked away 30 years later.

But what a strange effect toys can have on you…

I still dream about Ingrid…