Mike writes stuff. He created a TV show that almost got made and adapted HOWL’S MOVING CASTLE for the London stage. His web series, Caper, has just been nominated for a Writers Guild Award. In his toy story, Mike has a conversation with an old friend. 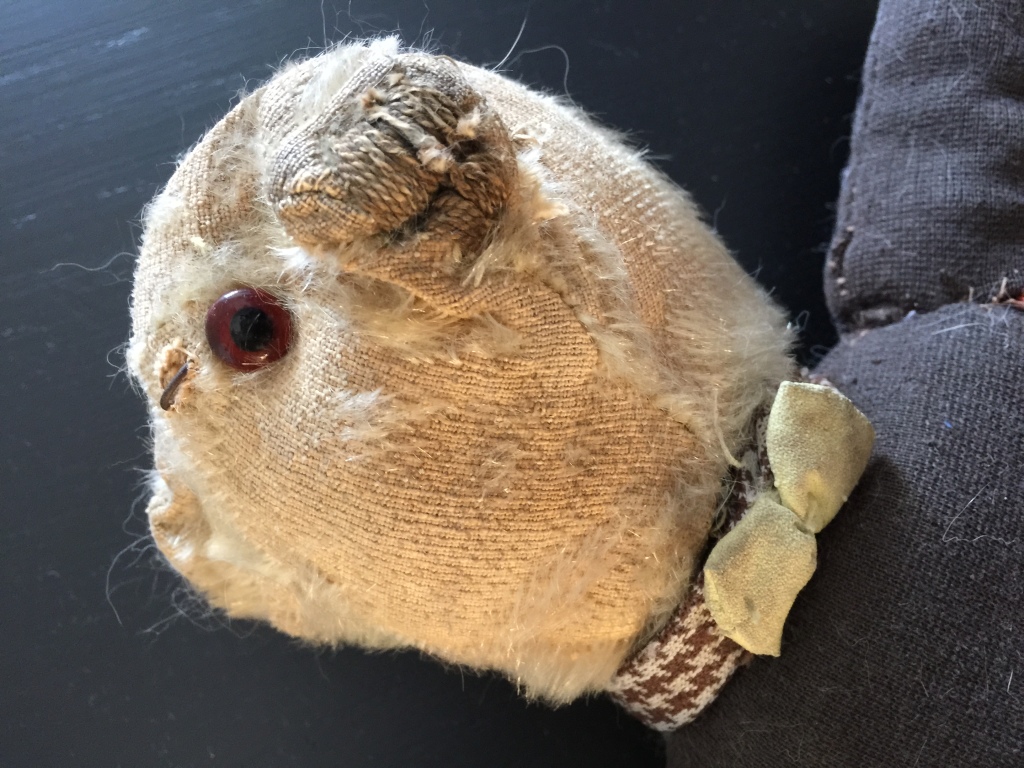 It takes me a while to find him. I was sure he was in the back of the wardrobe, but I eventually uncover him at the bottom of a box in the spare room. He’s crushed beneath a pile of yellowing 2000ADs, but no worse for ware than when I put him there.

But haven’t we all?

I clean him up the best I can, taking a good hard look at him as I do so. Rupert. My father’s bear first. Then mine.

His surviving eye is duller than I remember, but the spark is still there. When he speaks it’s difficult. Sawdust falls from a cut in his throat and gives his tone a rasping quality that I don’t recall from childhood.

I can’t tell if he’s surprised, disappointed or impressed.

So far. How’ve you been?

Good. You still look the same.

The last time his appearance was altered must have been around 1980. Originally, I believe, he was naked, but my earliest memory of him was as a bright orange and blue clad bear. Golden fur, now mostly gone, is covered by his ‘new’ outfit. My grandmother, a seamstress, gave him his first outfit when he became mine. When those clothes became worn she covered him in a more hard­wearing, but dull fabric. He now sports a brown ensemble finished off with a filthy yellow bow tie.

The seam under his left arm has burst and a piece of his old outfit juts out. I can see the stuffing inside. A mixture of cast­off fabric strips and sawdust.

He takes my examination and prodding without a word. I turn him around and smooth the fur where his eye used to be.

Do you remember taking it? My eye?

I do. I don’t know why I did it, but I remember finally feeling the glass come free in my fingers and finding it had been held in place by a nasty looking piece of metal wire pushed deep into his head. Giving him to a child now would probably be illegal.

Sorry about that. I was a kid, Rupert.

He had never looked like Mary Tourtel’s creation, but this was the name my father had given him. Above his remaining eye the wire has bent and poked out of the skin a little. It looks like a piercing.

I never liked that name, he says.

A lot of bears were named Rupert, I reply.

Exactly. Not a name. A slur.

He cuts me off.

He died. You know what that means?

Sometimes things crawl inside me. I feel them move around and make a home.

He stops speaking as I pick him up like the filthy rag and sawdust thing he is and put him back in the box.

In the next room it takes me a little longer to get to sleep than usual. My head aches, directly behind my eye. Like a long wire has been pushed inside. But eventually it fades.