Actor, comedian, writer, Robert Llewellyn is perhaps most well known for his role as Kryten in the sci-fi comedy Red Dwarf and as presenter of Scrapheap Challenge. He has more recently become a champion of electric propulsion and written a trilogy of protopian science fiction. In his toy story, Robert recalls the memory of where his love of all things mechanical began. 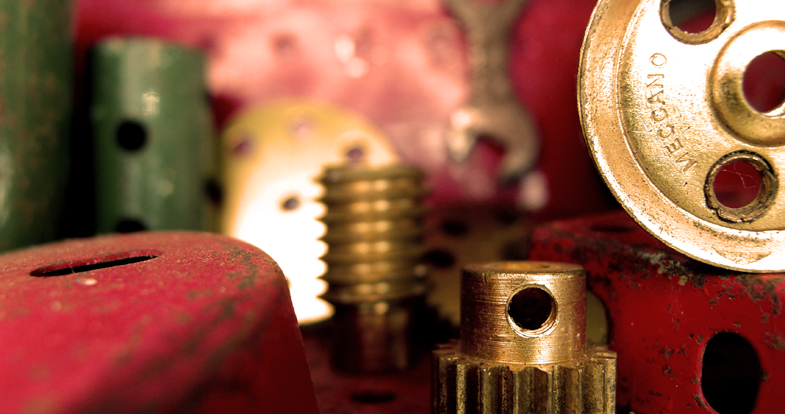 When I was 11 years old I withdrew £5 from my junior building society and gave it to my friend Pete. In exchange I got a massive wooden box and a large canvas bag that I carried out of his house and heaved into the boot of my dad’s 1.6 litre Vauxhall Victor FC.

It was the biggest and heaviest thing I’d ever carried, a yellow painted wooden box with big brass fittings. I had literally dreamed about owning this box, I had fantasized about opening it during interminable Latin lessons at school.

As soon as I got it back to our house my dad helped me carry it into my bedroom. I set the box up on a small table and opened the front. 5 wooden drawers were revealed each with 2 small wooden handles, and as I slid open one drawer after another I was greeted with an Aladdin’s cave of wonder.

This was a ‘pre-war’ Meccano Set 9, in the original wooden box. The canvas bag contained an enormous amount of additional equipment, electric motor and transformer, a Mamod Steam engine and a huge pile of Meccano instruction manuals.

I have no memory of the first machine I tried to build but I can clearly remember the smell and feel of this engineering marvel. The set I bought off Pete was well cared for and I discovered later through my parents that Pete’s mum and dad had bought it for him for Christmas and he showed no interest in it what-so-ever.

How could that be? I liked Pete but his lack of interest baffled me. This was the best thing I had ever owned, I’ll go further, it was simply the best thing, ever.

Everything in the drawers was neatly arranged, construction strips of various lengths, some angled for extra strength. Corner brackets, angle brackets all painted green. 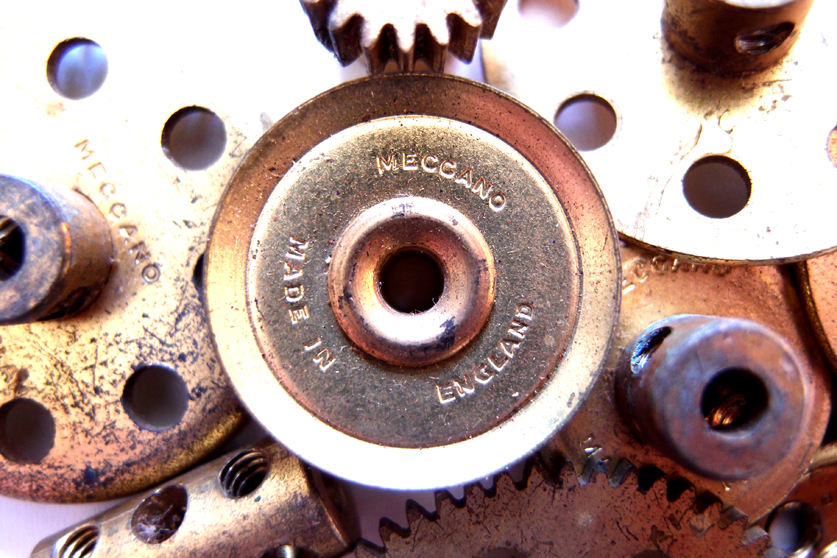 Another drawer revealed a huge range of cogs and gear wheels, chain wheels, belt pulley wheels, axles and brass spacers and axle linkage units. Further drawers revealed a huge collection of metal plates of various sizes, all painted glossy red and neatly drilled around the edge. In an old tobacco tin I found an amazing collection of Meccano nuts and bolts, in another tin washers and very small gear wheels.

This set kept me occupied for literally years. I loved building things with it, inspired by the engineering of what was already a bygone era, I built beam engines, drag line diggers and at one point a wind powered automatic hammer. I’m not sure what inspired the hammer but I remember it tapping away in the garden on a windy day. It was a really high tower, maybe 4 feet tall and on the top was mounted what could crudely be described as a wind turbine. The drive from this went through a system of gears and turned a long axle running down the tower, supported at strategic points by well lubricated angle pieces. The axle went into another gearbox arrangement at the foot of the tower that drove the automatic hammer.

It’s very possible I’d seen an automatic hammer in a TV documentary about the steel industry and it’s brutal repetitive action would have appealed to me. I loved massive engineering that made lots of noise and sparks.

My hammer was tiny and very puny but it did work. It tippy-tip-tapped away with no problem. 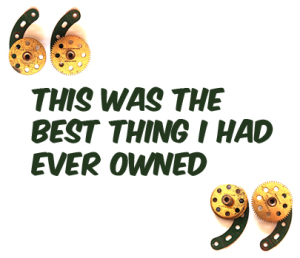 The most successful machine I ever built was a ‘dragline digger’. This was memorably inspired by seeing one of these behemoths in action at an iron quarry near Corby. A massive digger weighing thousands of tons swung a huge bucket out from its gargantuan crane arm. This was dropped like a stone and sank into the ground with a dull thud. A cable attached to the front of the bucket literally dragged it toward the crane as it scraped up tons of red iron ore from the ever-increasing hole in the ground.

I recreated this in Meccano it was the single biggest thing I ever made. The main body of the crane was the size of a bread bin and the crane arm was probably 3 feet long. The bucket, complete with earth ripping teeth along the front edge was made heavy by attaching a weight from my mother’s kitchen scales.

My monster digger was powered by the electric motor, however the transformer, a crude device that wouldn’t have looked out of place in a 1930’s Frankenstein movie was built into the structure. This heavy weight lump of pre-war electronics was was a little bit dodgy. As my 12-year-old fingers gingerly increased the power I would receive an electric shock at completely random moments, it didn’t always happen which lulled you into a false sense of security. Just as I was concentrating on getting the winding mechanism to operate correctly and pull the heavy bucket toward the digger, wham, a jolt fired up my arm.

I tested it on some soft soil in the family garden. It dug remarkably well, scraping the earth, turning and tipping it out until there was an impressive hole with a large pile of earth to one side. It was only later I learned that this particular patch of soft earth was in fact my father’s carrot patch, recently dug over, weeded, sewn with carrot seeds and raked smooth.

My Meccano hobby was less popular that day but I did learn some new expletives from my raging dad.

Sadly my Meccano set is long gone, my own children played with Lego (I joined in) and eventually fell into a world of screens, but there is no question, I learned how things worked by making them. 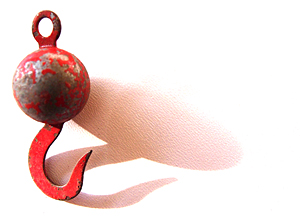