Dallas is one of the most versatile and well travelled factual presenters working in the industry. He has filmed in some of the most extraordinary & challenging locations all over the world. When not investigating life, the universe and everything, he enjoys cooking, scuba diving, free diving an is an accomplished amateur magician. He has an encyclopaedic knowledge of space suits, the periodic table, Alan Partridge, and the films of Werner Herzog. Although most of his spare time is spent cleaning up after his two children. In his story, Dallas takes us back to a time more watercolour than HD.


Chutes Away by Dallas Campbell 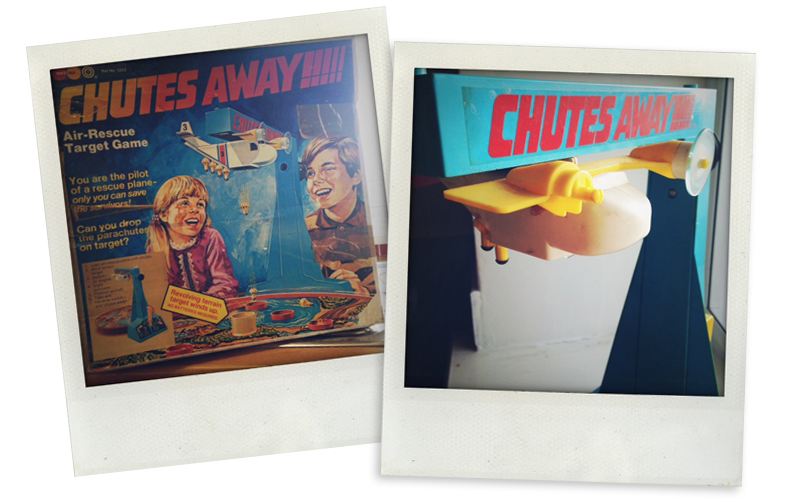 “Only I can pilot the rescue plane and save the survivors.”

I’ve taken my two kids to my mum’s house in rural Northumberland for my share of the half-term break. She lives here with her wonderful husband who has become their cherished ‘grandpa-who-ever-you-are’, a name of affection that bypasses the complexities of my family life. There is a strictly observed ritual when they walk through the front door: a sprint upstairs to their shared bedroom to greet Emu & Sparkle. Emu (mine) as in ‘Rod Hull & Emu’ and Sparkle as in a long bodied sheep draught excluder. Origin unknown. They will be their constant companions for the duration of the visit. While this is going on I root around an under stairs cupboard for my own childhood friend which they’ve also adopted as their own, namely a small duffle bag (once used in a poorly thought out runaway attempt aged 10 and then later as a hiding place for cigarettes) stuffed with Lego from various Lego sets from the 70’s and early 80’s. 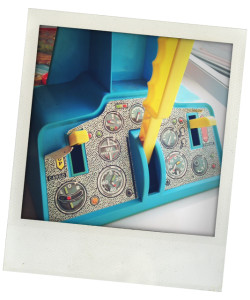 Plastic crumbs of a decade of Christmas and birthday presents jumbled together which provide my own intense Proustian rush. Lego was my salvation growing up. Later in my early teens I had Lego with instructions on how to build specific things like moon bases and JCBs, but gradually, like mixed paints, it’s become an inseparable pleasing jumble.

But there is something else. I pull out a large white cardboard box held together with yellowing brown parcel tape that’s shedding dust. On the side is a serving suggestion illustration of two perfect 1970’s children – a boy and a girl – playing the game inside, their wholesome faces as familiar as my own kids. Unlike mine these two have always been this age. In the cupboard under the stairs it’s always 1978. Like an Instagrammed Narnia, the laws of physics have broken down and are playing by their own rules. 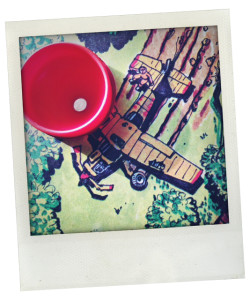 The game in question is called Chutes Away. The idea is to release little weighted yellow plastic parachutes which drop from a suspended model aircraft onto a round rotating illustrated target disk below. A lever controls the plane, and an eyepiece with a 45 degree mirrored sight with cross hairs to line everything up. I was first introduced to it on the last day of a primary school term when we could all bring in toys. There was a stunned silence in class when someone revealed Chutes Away. Before any of us knew what it was, or did, the whole class knew it was the best thing ever. The ultra-modern architectural design. The blue and yellow palette was straight out of a Wes Anderson film, if Wes Anderson had been making films in the 70’s. Which you could argue he is. The illustrated artwork on the target disk was thrilling – a rugged landscape with car, plane & helicopter crashes and stranded survivors waving desperately for help. Looking through that eyepiece transported you to another world. A protovirtual reality. A world of adventure. This was not a drill: we were witnessing something special. My mother was duly pestered.

Chutes Away never did set the world on fire, surviving for a couple of years or so before it was discontinued. I pulled mine out of the box to show the kids. It hadn’t been used for a while so I set about fixing the seized up clockwork mechanism that drives the rotating target. This was classic dad tinkering. The past was methodically unscrewed to reveal the innards for the first time. Springs, cogs, gears and levers were WD40’d and carefully reassembled. A few cosmetic battle scars remained. Flesh wounds. A propeller missing. A parachutist in need of emergency surgery, dried up stickers flaking off. I realised this was an important moment. My kids are exactly the same age as the boy and girl on the box. At least visually they seem to be. With Granny’s help we decide to mark this occasion by getting them to recreate the picture exactly as drawn. Although the set up is almost perfect, the photograph looks too real. Too actual reality. Luckily the digital revolution can fix that and with a photo-painting app I transport them back to a gentler time. Forever children. Pain free. Forever 2015. My memory of Chutes Away like most of my memories is more watercolour than HD. Impressionistic and blurred around the edges. 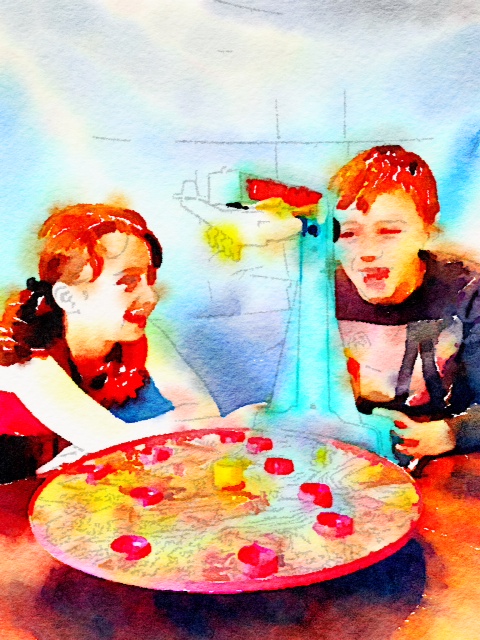 I carefully wind up the mechanism and turn back the clock. The kids are enthralled as I knew they would be. I am suddenly deeply aware of time. Of the awesome responsibility. Only I can save them.

Today I wish a parachute would fall from the sky and bring me help.