Moose is an artist, writer, cartoonist and prolific tweeter. He lives and works in Devon, England. For many years he worked in London as an architect specialising in public consultation & urban regeneration and contributed to the UK´s successful Olympic bid. He moved to the coast in 2006 to concentrate on his art and to have fun by the sea.

In this toy story Moose talks about his struggle with nostalgia and that, despite this, there is still a place for one special toy in his life. 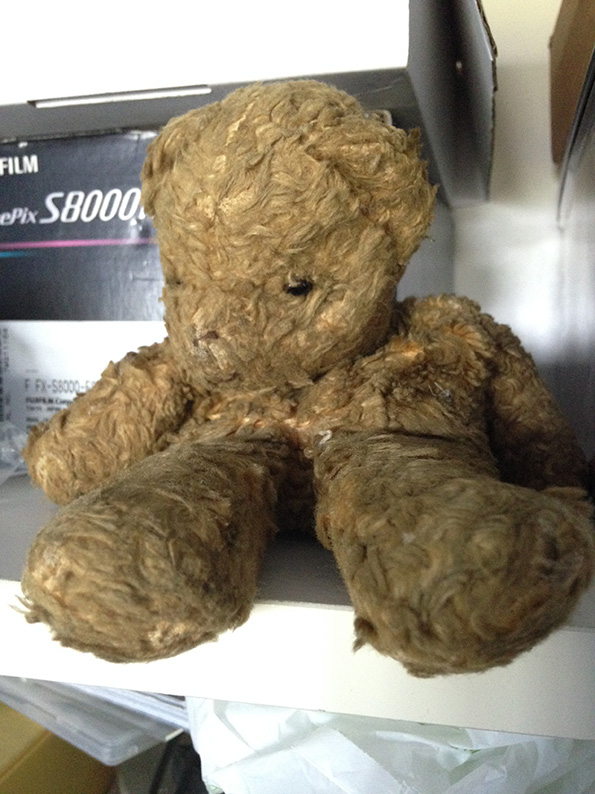 When I think back to the toys of my childhood, I don’t have particular attachments. I loved my lego (it was all bricks and the odd window in those days) and my toy cars. The one toy I loved was immediately an absence, a rubber bat I named Baš Čelik. I lost him almost as soon as I’d got him and subsequently yearned for him and for understanding the mystery of his disappearance. God knows, I searched for him everywhere!

But I am not a particularly nostalgic person. I think of my childhood as happy, mostly, but it’s not a place I revisit very often. I tend not to dwell on it. Despite this, I used to drag my past around with me – literally: I had boxes of old letters, diaries, cuttings, university notebooks, stuff that I’ve not been able to throw away. Whenever I’ve moved house, which has been a handful of times in the last three decades, I’ve dipped into these boxes and allowed myself the indulgence of nostalgia and it’s always been a somewhat melancholy exercise. Even the happy memories were tinged, somehow, with a sadness of times past, of clinging on to something that could never be again.

I realised the past was always there, looming, a confrontation deferred. Having children shifted that focus. I remembered as a child being shown my dad’s school books, and feeling that this stuff I was bringing with me was some sort of legacy that I owed my own children. But this was nonsense. I had a realisation, flicking through some of my student architecture sketchbooks that if I was barely interested in this stuff, then who the hell else would be? It was a burden, and one that I would inflict on my family, just a lot of painful stuff that they would have to wade through one day.

I spent a few hours thumbing through it, judging it. Then I set up the incinerator in the garden and burnt a lot of it. And it felt tremendously liberating. I am having an interesting life, came late to being an artist, working on fantastic projects with some wonderful people. I want to look to the future, not the past.

But for some reason I still have Bombardy. He sits on a shelf in my studio, in amongst the boxes of inks and DVD back up discs. The stuffing has gradually seeped out of him like the proverbial sands of time, despite my mum stitching him back together from time to time. I used to like throwing him around – hence the name – but I loved him dearly. I look at him now: can I remember that love? Not really. I only know that it once existed. But he’s still here with me, today, and he will be tomorrow.