Gia Milinovich describes herself as a comedy lover, science groupie and professional dork. Her interests range from Ancient Egypt to the Apollo Moon landings, from cult films of the 70s and 80s to soft circuits. In her toy story, Gia discovers that despite being a skeptic, she still believes in the magic of toys. 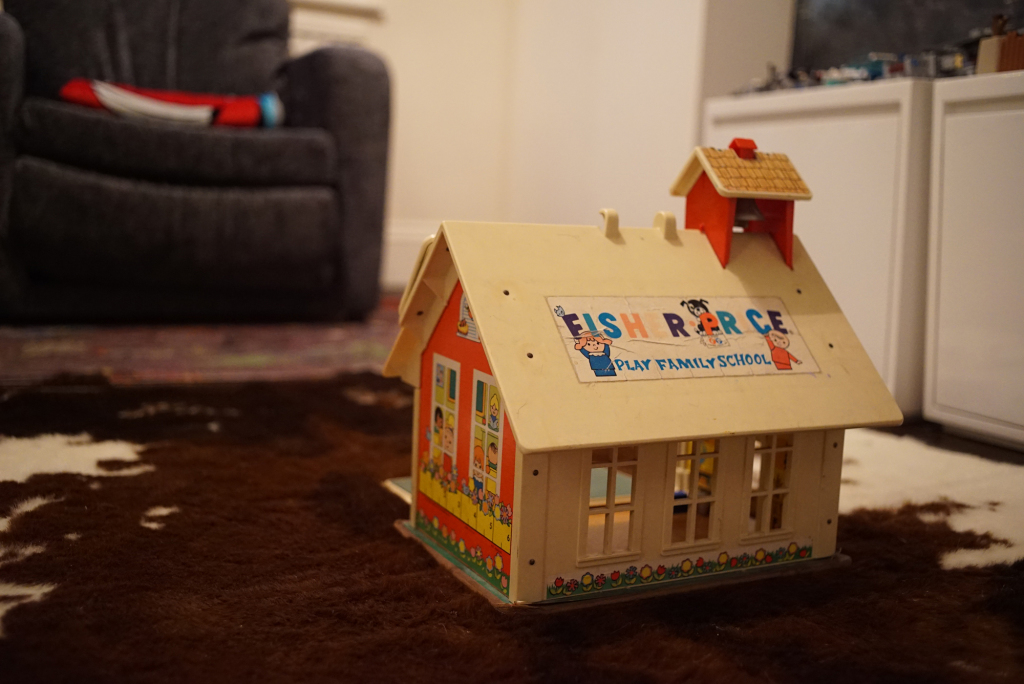 Some of my earliest memories are of sitting on the turquoise shag pile carpet on the floor in the family room of my maternal grandparents’ house playing with a Fisher Price House and Barn. The car in the garage. The moveable staircase. The sponge mattresses on the yellow beds. The chickens behind the sliding doors of the hayloft at the top of the barn. The ‘ding’ of the doorbell when you flicked the button down at the front door of the house. The ‘moo’ when you opened the barn door. The black and white dog’s bent ears. The skinny black legs of the sheep.

Over the years my younger sister and I had loads of Fisher Price toys for Christmas or our birthdays, they were our very favourite toys: the School, the A-Frame House, the Camper Van, the Circus Train, the Chatter Phone, the Airplane, the Parking Garage, the Medical Kit, the Music Box Record Player, the School Days Desk. Hours upon hours upon hours were spent playing with these toys.

And then they were gone.

I grew up. Moved away from home. My parents got rid of the toys at some point. I didn’t think of them again for many years – until I had my own kids.

As soon as my son started playing with toys I got onto eBay and bought him a Farm, one of my favourite toys. When the Farm arrived (“in good played with condition”), I thought “But this isn’t like mine! Mine didn’t have the corners worn away like that! The silo is discoloured! Is that a bit of marker in the hay loft?! I didn’t do that! This isn’t right at all. The dog’s ears are broken off. Outrageous!” When I played with my Farm, it was modern, clean, unmarked, in excellent condition for its age- which was BNIB. This eBay one was like looking through an Instagram 1977 filter – it was faded, blurred, not retro, but old…

The evocative ‘moo’ when I opened the door wasn’t enough for me to hold onto it. I brought it to the charity shop the next day.

I went back to eBay and found a School. I had loved my School. I scrutinised this eBay one much more than I had the Farm. It had all the chairs, desks, playground equipment and the letter trays. Bid. Won. Good. 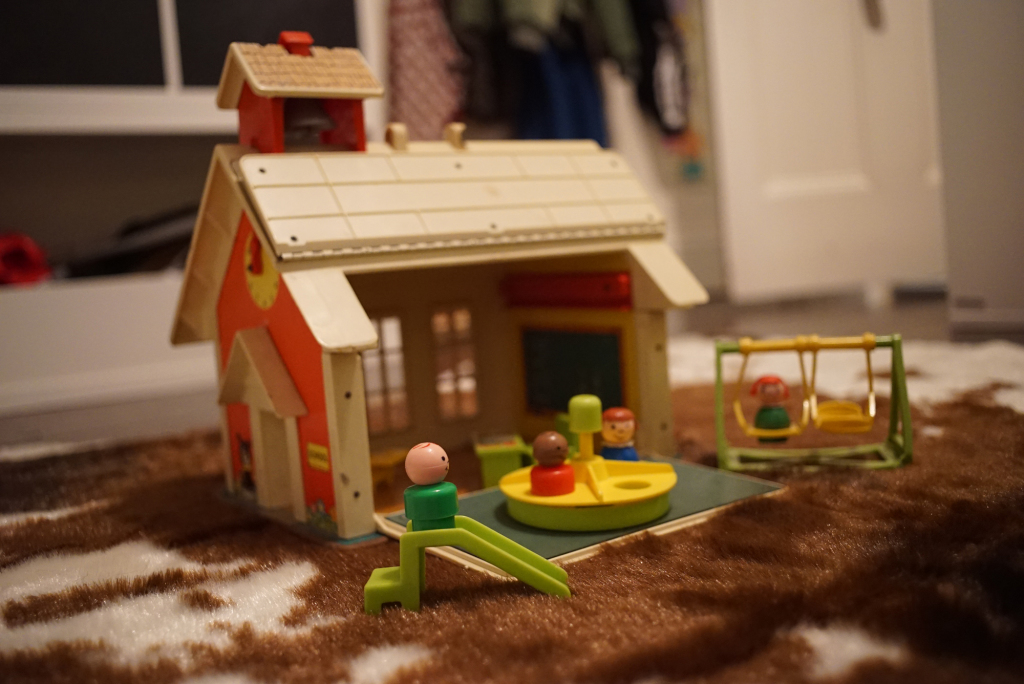 I was happier with the School. It was in pretty good condition. But… the sponge was missing from the eraser. I considered going back to eBay to find a replacement, but realised my son wouldn’t really care. The sticker on the roof was pretty worn, but it’s 40 year old. And then a couple days after we got it, the handle on the top broke off. “Well, REALLY!! MY handle wouldn’t have broken off. This is not as good as my School was.”… but I kept it because my son had already grown fond of it. Several years on and he still plays with it. I see it every day and every day I think “that’s not mine”…

But it got me thinking.

Professor Bruce Hood’s book Supersense is all about how most of us have supernatural beliefs. I remember reading it and thinking “Ha! You’re not going to catch me out. I’m an atheist, a skeptic! I don’t buy into any of that nonsense!” And then he talked about collecting things and I realised he’d got me. *shakes fist* Damn you, Hood!

Collectors- of film props, autographs, motor cycles speedway badges, space flown artifacts, toys, whatever…- only want originals. Reproductions will not do. Only originals have the ‘magic’ collectors are looking for.

The experiences I had playing with Fisher Price toys as a child were very different from the feelings I have when I think about them now as an adult. When I was 7, 8, 9, 10 I wasn’t playing with them filled with nostalgia for an uncomplicated, safe, responsibility-free time in my life; I was playing, being, living in the moment, using the toys to create stories, to fuel my imagination, to have fun.

I realised how nearly 40 years on with my (son’s) secondhand Fisher Price toys I was trying to find some kind of “magic” in them. Something that would tell me “This was mine. This was the thing that was with me when I was a kid. There is comfort in this.” and because they weren’t exactly as I remembered mine to be, I couldn’t find that magic.

If Fisher Price decided to re-issue some modern vintage toys using all the same moulds for the chairs and desks and beds and cars, made the Little People out of wood, used the same inks in exactly the same colours and sold them in boxes identical to the ones they were in originally without any hint that they were re-releases – in short, if I could find a Fisher Price School that was in every possible way the same as the Fisher Price School I received for Christmas all those years ago, I still wouldn’t find the magic… because they wouldn’t be originals. They still wouldn’t be ‘mine’. 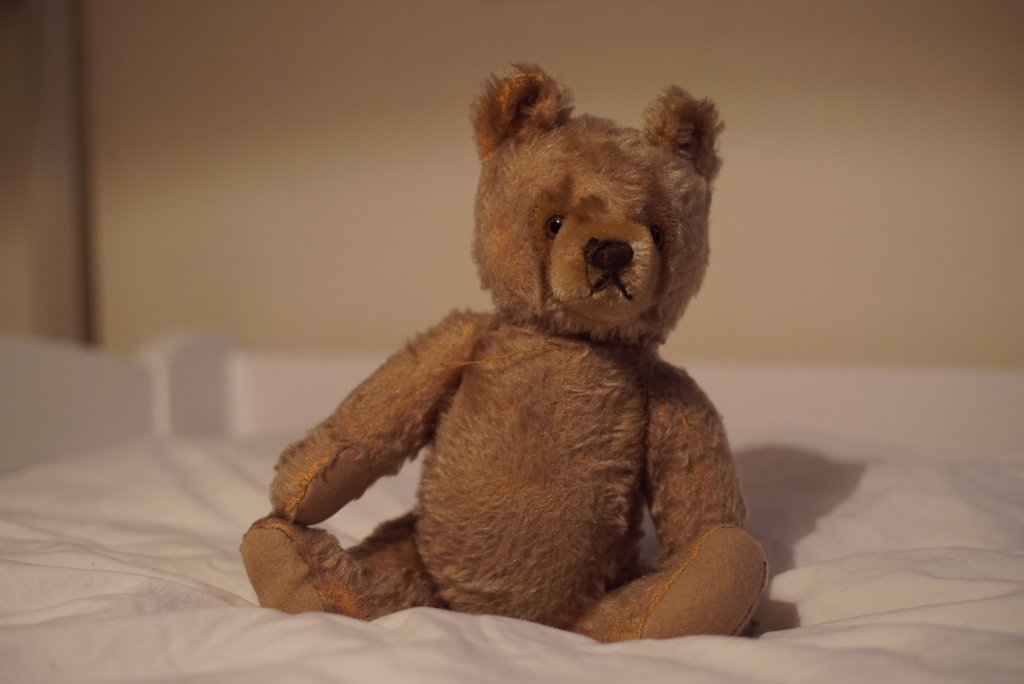 I have several of my original toys- Muppets, Barbie and Ken, my first Teddy Bear- just seeing them on my shelves takes me back to my childhood. Imagine though if someone took my Bear today and created an exact replica with the prickly fur, the loose threads on the nose and the chest, the strange squeaky mooing sound he makes when you turn him over. Identical, even down to an atomic level. Then they took my Bear and the fake-but-identical-Bear, mixed them up and finally destroyed one randomly. Would I be able to find the ‘magic’ in that Bear knowing there was a 50/50 chance he wasn’t the one with me when I was a kid?

I do believe in the magic of toys though.