Jon Butterworth is a physics professor at University College London. He is a member of the UCL High Energy Physics group and works on the Atlas experiment at Cern’s Large Hadron Collider. In his story, Jon talks about his materialistic and violent past. 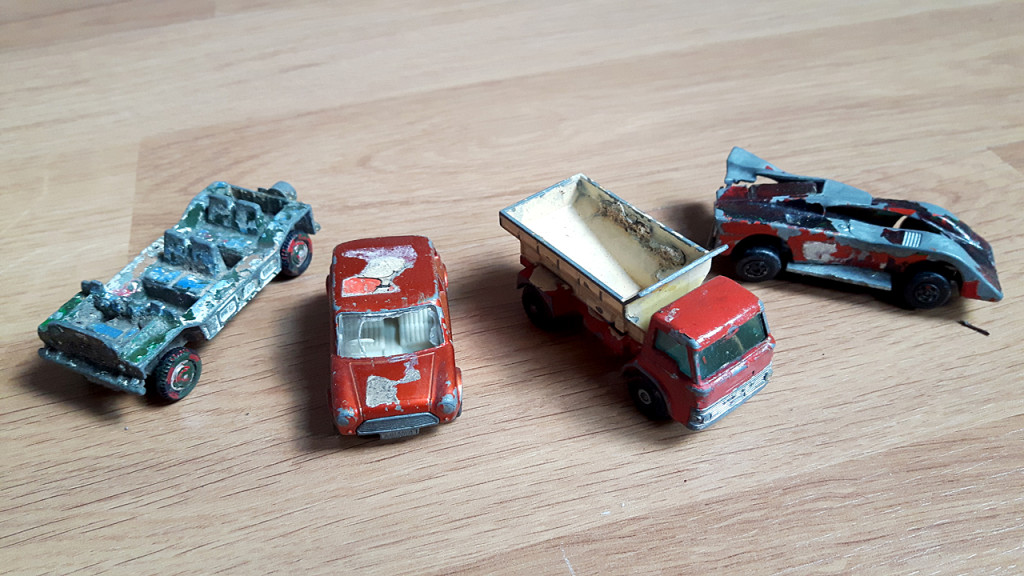 I’m no petrol-head. I cycle to work in London, and although I do drive sometimes, I have never owned a real car. But when I was just a few years old, I used to know the name and make of every car on the road, and quite a few that weren’t. I don’t think anyone in our bit of Manchester drove a Tomaso Mangusta, but if I’d seen one I would have known it instantly.

For a while, my mum would buy me a small matchbox model car every week. I would stick the pictures from the boxes in my ‘car book’ (these ran to four volumes eventually). The photo shows some of the survivors. On the left is a battered ‘Prisoner’ Mini-Moke, from the TV series with Patrick McGoohan, which I didn’t actually see until more than a decade later. It was still later that I visited Portmeirion, and walked the claustrophobic roads which the mini-mokes would cruise in their weirdly sinister manner.

Next to the mini-moke, the mini has the remnant of Snoopy stickers I added. I was very fond of Snoopy (but that’s another toy), and of that car. It used to bomb it on the yellow plastic ‘superfast’ track. Loop-the-loop was no problem.

The sanding truck was more sedate, but used to work with real sand. Our carpets rarely iced up in those days, I’m sure my mum was grateful.

The final car, on the right, has clearly suffered from a ‘bashing up’ session. I used to go into the yard and hit toy cars with a hammer. Sometimes this would be simply to pulverise ones that I had become bored with. Sometimes, as in this case, I would make them look like they had been in a smash up, and they would gain a new lease of life in the elaborate fantasy car-chases which I (in collaboration, after a while, with my younger brother) would run, across floors and furniture.

Checking the loft, I don’t have as many of these left as I thought I had. Another thing my brother and I did was run ‘bartering sessions’, lining up toys – mainly cars – and swapping and dealing. While as the elder I had a certain advantage of experience in these early on, I think in the last few sessions he was significantly keener than me and probably has most of the gems stashed away now.

On re-reading, the above all makes me sound much more materialistic and violent than I think I am these days. Maybe I grew out of it.